Added to cart - view your cart.

The use of Agripure hypochlorous dry fogging to disinfect raspberries

The use of Agripure hypochlorous dry fogging to disinfect raspberries

Aqualution has a long-standing collaborative relationship with Marks and Spencer stretching back to 2011 and has worked with them and their supply chain on a number of projects using hypochlorous.

One area of particular concern was virus contamination of food with two thirds of foodborne illness outbreaks caused by viruses with there being approximately 5,000 cases of Norovirus in people having consumed previously frozen soft fruit. A particular case in Denmark in 2004 saw 1,100 cases of Norovirus that was traced back to raspberries that had been frozen for over 12 months before use. In addition, an FSA study reporting in 2019 discovered PCR evidence of Norovirus or Hepatitis A on approximately 5% of lettuce and fresh and frozen raspberries sourced from a wide range of supermarket shelves.

There is significant evidence that freezing preserves the virus as well as the fruit. This rightly caused significant retailer concern over the use of IQF in RTE products containing unprocessed berries, such as berry compote on cheesecakes.

However, soft fruit such as raspberries, are fragile in nature and decontamination by washing damages the integrity of the fruit. A new solution and methodology was needed that without causing residue toxicity.

In 2013, Marks and Spencer approached Aqualution to develop a solution to decontaminate raspberries. We already had experience of using a dry hypochlorous acid fog as a decontamination treatment for eggs, so applied this technology to various fruits including raspberries and investigated its inactivation of bacteria and viruses on frozen raspberries to provide evidence for Marks and Spencer that the dry misting approach would be a suitable intervention strategy to minimise microbial risks on fruit used as an ingredient in their chilled deserts.

Marks and Spencer chose raspberries as the target for this trial as a “worst case scenario” for decontamination, due to their large irregular surface and plug. If the decontamination approaches worked with raspberries, the method would be moved to other berry types. 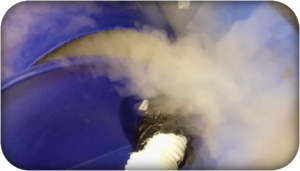 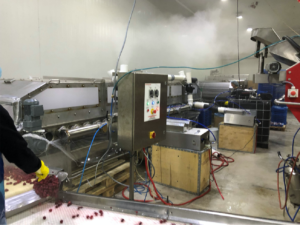 This protocol was designed to assess the efficacy of Aqualution dry mist on E. coli, Salmonella and Listeria monocytogenes as bacterial pathogenic organisms, and against MS2 bacteriophage which is a well-known surrogate for human Norovirus.

The study used inoculated chilled and frozen raspberries with MS2 bacteriophage, a Norovirus surrogate (target inoculation rates 105 – 106 cfu g-1). Three batches of chilled and three batches of frozen were dry misted (exposure time 5 minutes) and samples were taken in triplicate with the aim of achieving a 1 log reduction.

The results were better than hoped for, with the chilled batch showing a 2.3 log reduction and the frozen batch a 1.1 log reduction.

This HOCl dry fogging system is now in commercial use in a number of M&S supply chain companies, including the UK’s largest IQF fruit producer, to effectively disinfect prior to packing and M&S is also using Aqualution hypochlorous as a conventional produce decontamination solution.